How to Create a Change

Go to start of metadata

Before starting to change the code, please follow the Checking Out Code for Development article. After this is done, making a change is a simple 5-step process:

Let's have a look at these steps. There is also an example at the end.

1. A programmer fixes his imagination in a tangible form called a hack*.

Let's say you have found some bug in our code you think you can fix, or picked up some nice ticket on our JIRA issues list. In other words, you want to make a change in SIO2. If you haven't contributed to any open source project before, you may find yourself a bit confused. This tutorial will help you get started in developing SIO2.

If you want to start from an easy task, and would like to have your code in SIO2 soon, try the inspirations page.

2. The programmer gets some pizza, enters the cleanroom and hacks.

Hacking should be started from a clean and up-to-date repository state, for example by creating a new branch from origin/master:

Then the programmer hacks until he thinks the hack is good enough that no reviewer will think that this is a hack, but everyone will see the beauty of a clean solution.

3. The programmer writes tests for the code.

We have a separate article on how to write, run, debug, fix, run again, fix again, and celebrate the tests in SIO2.

4. The programmer sends his change for review.

The programmer should commit the change locally, adding a meaningful description, not forgetting to place the ID of the Jira issue, if any.

Otherwise you should start your message with (no-ticket).

Then the change should be admired by its author. After going into admiration of his own change, the programmer wants others to admire it as well. Artists use galleries for this, programmers use Gerrit.

After the changes are uploaded to Gerrit, the tests will be automatically run for each of them. If any of the tests fail, the change bust be fixed (see the next section).

In order to submit the change to the main repository, the change must meet the requirements listed below.

5. The programmer sees a review.

If the programmer disagrees with reviewer's comments, they should discuss the issue on Gerrit (using Review with no score) or in person, on Jabber, by e-mail, etc. If there are problems with going into agreement, write to sio2@sio2project.mimuw.edu.pl.

Often the Gerrit change needs to be updated. This is done by uploading additional patch sets. You do this by "changing" the Git commit in your local repository, but retaining the original Change-Id: line, which is added automatically to all Git commit messages.

So for example, assuming that your branch was named my_new_hack, you should do something like this:

Please do not change the Change-Id line in the change description. If there is no Change-Id line, go back to Checking Out Code for Development and make sure that appropriate Git hooks are installed.

After this, the change in Gerrit should show a new patch set, which again should be reviewed by the reviewer. Automatic e-mail message is sent to all reviewers as well.

If you don't have your branch, or don't know which one is that one, copy the command directly from Gerrit. It should look like

6. The programmer wants his change submitted to the repository.

There are two cases here:

If Gerrit says "Cannot merge due to conflicts", this means that some conflicting changes were accepted while the change was under review. The author must rebase the change to the current origin/master, resolving eventual conflicts.

After the change is submitted, if there is a Jira issue for the change, the programmer resolves the Jira issue.

The programmer may now delete the local Git branch.

... because the newly created change will automatically appear in the day's nightly builds.

Let's say you have found a bug in src/sio2/web/templates/ingredients/default_menu.html.

Suppose you already have the code. Create new git branch for this fix: (In such small changes you may want to fix the error directly in your master branch, but it's safer to always create separate one)

Now just edit the file and correct the spelling mistake.
Assuming you are in the src/sio2/web/templates/ingredients/ directory, type:

The last command will open default git editor, and you will have to type commit message on top of the file: 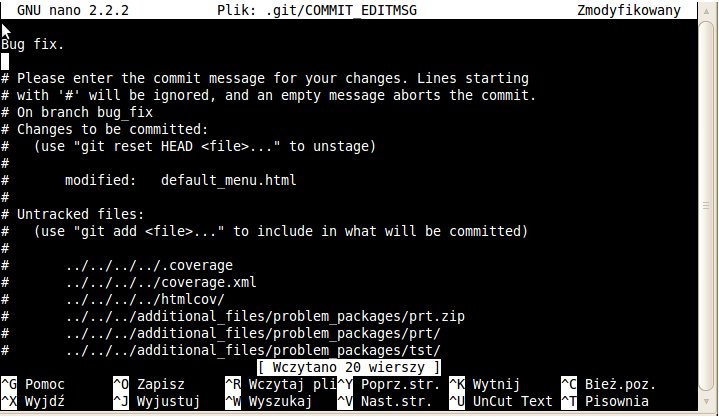 Now all you need to do is

Your change will now be reviewed in Gerrit. Go to the changeset page, wait for Hudson verification and if it's ok, add reviewers (or wait for someone to add them):

Click on Side-by-Side to view the diff of the file:

If all the reviewers accepted your change, and it passed the unittests, you can submit your change. If there are no conflicts you should now see: 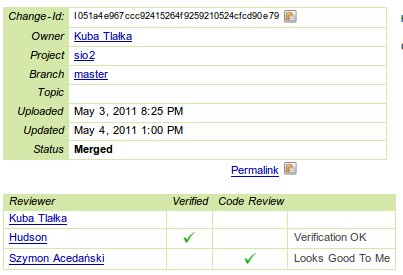 You have helped SIO2 on it's path to greatness!!!